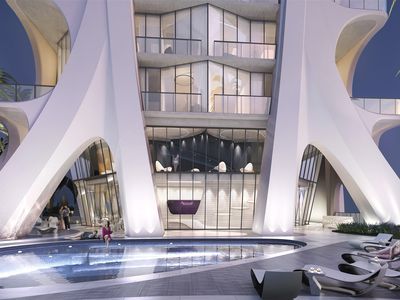 Can you imagine swimming laps here?

Didn’t get enough behind-the-scenes info on Miami’s Zaha Hadid-designed One Thousand Museum from its PBS Impossible Builds episode? The 62-tower with its unique structural exoskeletal design just topped off, and is on track for a late 2018 completion.

Now, the developers behind the Pritzker Prize winner’s futuristic residential skyscraper are releasing another look at the architect’s vision with new renderings of One Thousand Museum’s amenity spaces.

“We’re now one step closer to revealing Zaha Hadid’s forward-thinking design,” Louis Birdman, one of the co-developers on the project, said in a press release. “Even in its current state, the building already stands out as the most iconic architectural work on Miami’s skyline. We’re excited to have developed something so unique and special for Miami.”

The renderings show the project’s Sky Lounge, a double-height Aquatic Center with indoor pool, and a “Lifestyle Center and Spa” (which must be a fancy way of saying gym). Either way, this space would be an incredible place to work out.

“This is a project that will not only enhance Miami’s skyline, but also redefine the standard of luxury for residential projects,” said Brad Meltzer, president of New York-based Plaza Construction, which is overseeing the construction of One Thousand Museum. “We do not shy away from challenging projects, as such we were immediately interested when we saw the overall complexity of the job. To date, the project team has faced some major tests, but the project has remained on schedule and we’re looking forward to the successful completion.”