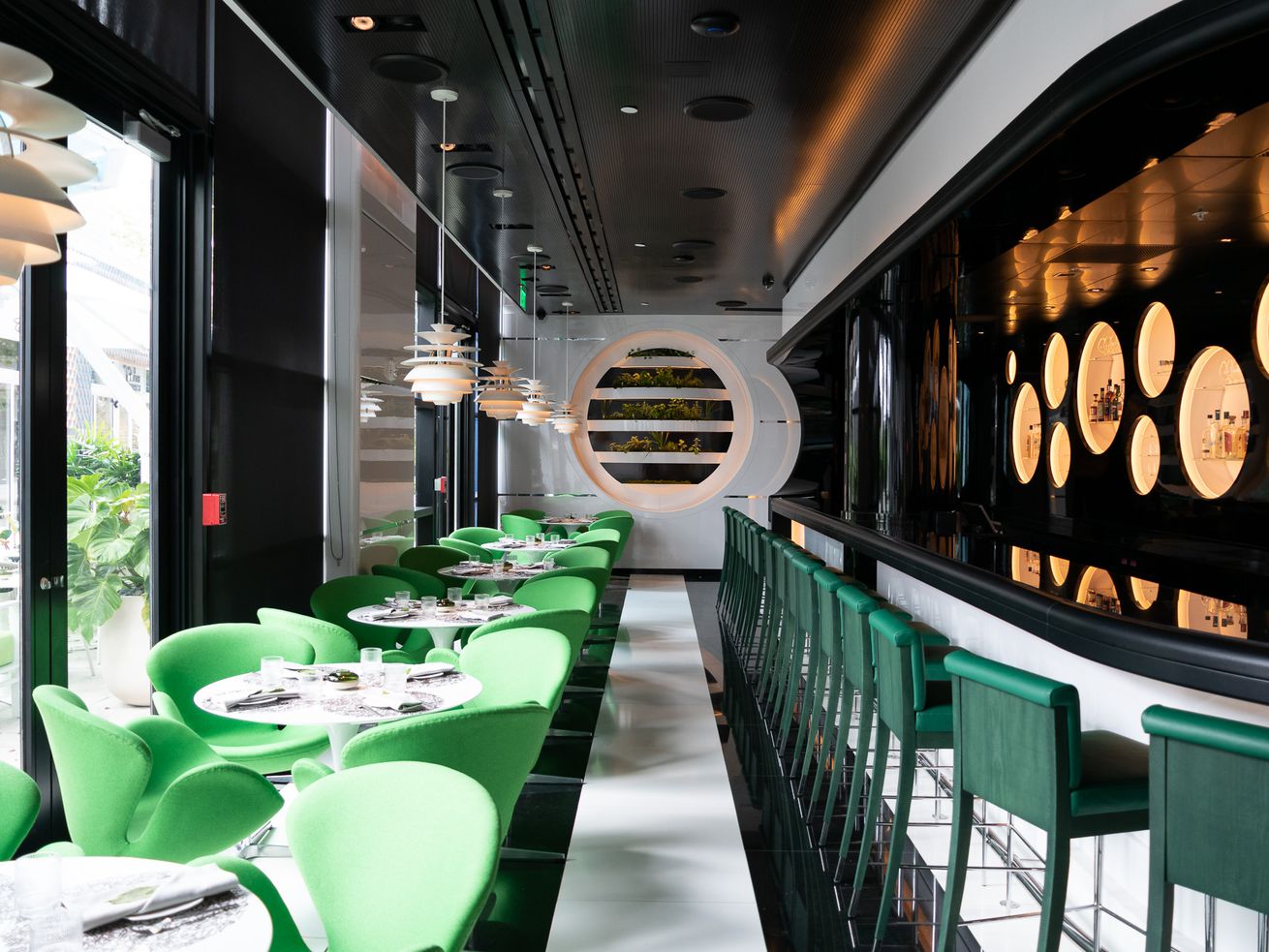 In April 2015 it was announced that famed chef Joël Robuchon would be bringing multiple restaurants to Miami. A lot has happened since then — including the passing of the acclaimed chef — but four-and-a-half years later, Le Jardinier (151 NE 41st Street), an eatery created by longtime Robuchon protégés, finally makes its grand debut tonight in the Miami Design District’s Paradise Plaza.

The restaurant is owned/operated by New York-based Invest Hospitality, and is connected to L’Atelier de Joël Robuchon (debuting August 28) located on the second floor directly above Le Jardinier.

Le Jardinier boasts vegetable-focused cuisine created by culinary director Alain Verzeroli, who currently serves as executive chef of the restaurant’s location in New York City. Verzeroli served under Robuchon for 21 years before branching out on his own — impressively helping him maintain three-Michelin stars at his Tokyo outpost for 11 of those years. Regional chef Leo Pablo, who has worked at spots like Stubborn Seed and J&G Grill by Jean Georges, serves as the day-to-day chef of the Miami outpost.

Highlights on the menu include items like the Bass with fennel, tomato confit and Meyer lemon; Watermelon Salad with heirloom tomatoes, ginger, and mint; and desserts like the aptly named Blueberry made with blueberry and lemongrass with an eggless merengue.

The drink program at Le Jardinier is led by beverage director Juan Carlos Santana and boasts cocktails created by by Dushan Zaric of Employees Only. Drinks feature a “strong emphasis on presentation and glassware,” like the La Mademoiselle made with gin shaken with a home-made grapefruit cordial and topped with brut rosé; and Mi Tierra with tequila shaken with mezcal, agave, lime, cucumbers and jalapeño-infused green chartreuse. The menu also features a selection of non-alcoholic cocktails made with teas, fruits, vegetable juices, herbs and house-made bitters.

The 4,200-square-foot, 108-seat restaurant was designed by award-winning French architect Pierre-Yves Rochon, and includes a 64-seat outdoor dining patio surrounded with plenty of plants. The space features black and white marble walls and floors, tall windows, marble tables, metal chairs, and a vertical garden serving as a focal point on the back wall. A 17-seat black marble bar sits off to the side with circular accent lights behind the glass shelving, and an illuminated spiral staircase that leads up to the second-floor L’Atelier.

Le Jardinier is now open for dinner, with lunch service to begin shortly. Le Jardinier is open 6 to 10 p.m on Sundays, and Tuesday through Thursday; and until 11 p.m. on Friday and Saturday. The restaurant is closed on Monday. To reserve a table visit here.