Miami’s Underline Park Project is a preview for our future 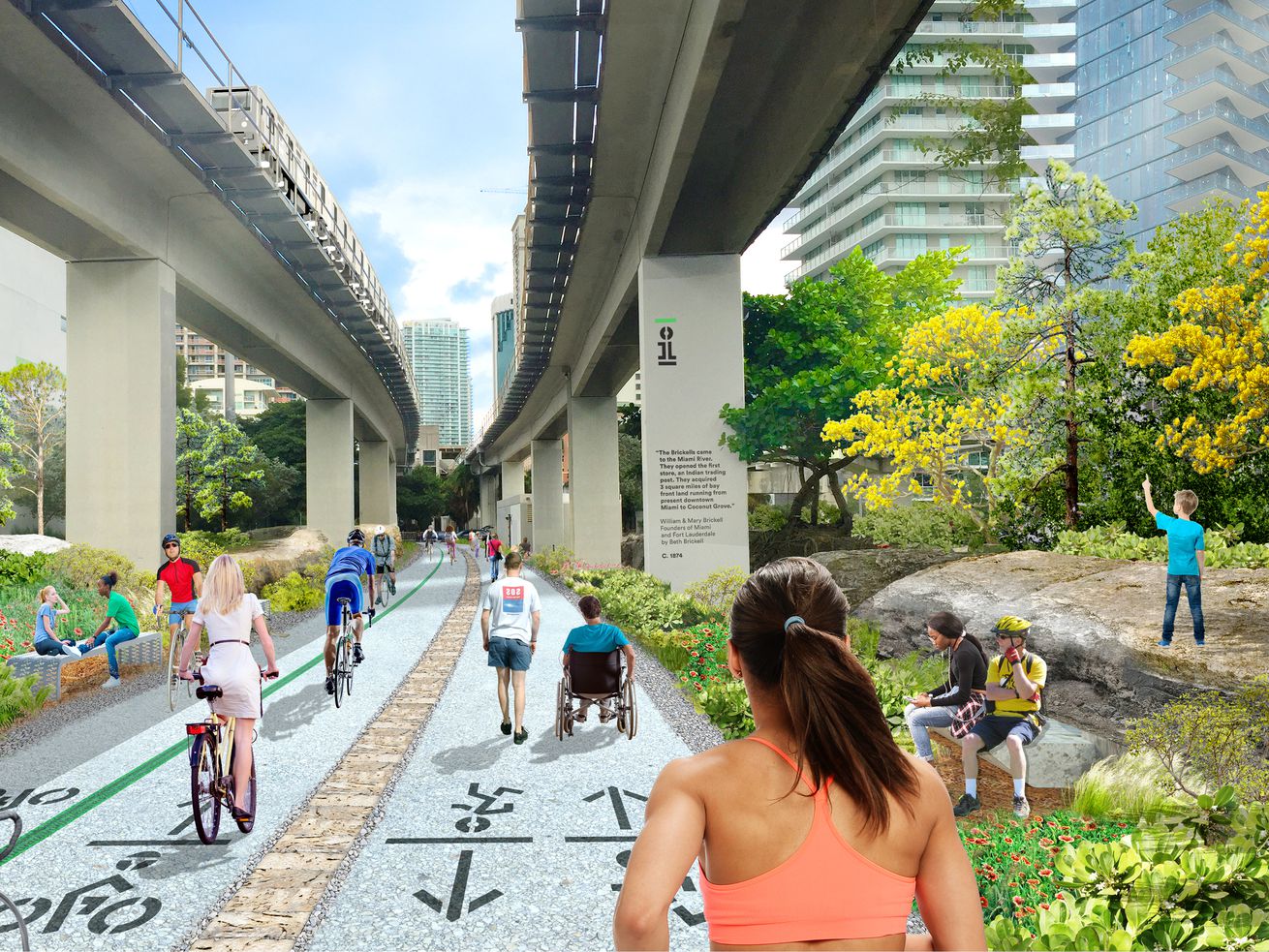 A 10-mile, $120 million transit corridor and public space poised to change how the city moves

Miami’s forthcoming Underline, by contrast, came to shape after Meg Daly, a digital marketer and the founder and president of the nonprofit backing the project, broke her arms five years ago. Incapacitated and largely limited to going to and from physical therapy, Daly realized she could take the city’s Metrorail and then walk to her doctor’s appointment. During one trip, she passed underneath the concrete pillars of the rail line, on a dark, shaded public path, and had an epiphany.

“Maybe because I was walking and experiencing it for the first time, it made me think, ‘Why don’t we do something like this, a park below Metrorail, inspired by the High Line?’” she told Curbed. “‘Why don’t we do this, that’ll be easy.’ I clearly didn’t know what I was getting into.”

Daly’s story illustrates the philosophy behind, and potential of, one of Miami and the nation’s most intriguing park projects. The 10-mile linear park, a $120 million redevelopment of open space under a span of Metrorail tracks roughly parallel to the north end of the Miami River, will link the condos, coworking spaces, and tech offices of the booming Brickell neighborhood with South Miami, in a bid to be a catalyst for community, connection, and safer transit.

The groundbreaking on the project’s first half-mile phase next month, which will begin construction of the so-called Brickell Backyard portion of the Underline, comes after five years of promotion, proposals, and fundraising.

Daly, a full-time volunteer who has shepherded the project forward, hopes this represents both the beginning of a transformational infrastructure project, as well as a shift in the planning philosophy for Miami-Dade County, a “very big gesture to rethinking how we rebuild infrastructure and transit.”

“Like every city in Florida, Miami is one of the most dangerous places in the U.S. to bike and walk,” Daly says. “It’s more dangerous that LA and New York. This park will provide last-mile connection to eight transit stations. The only way you’ll make people leave their car behind is giving them a safe way to get there.”

Metaphors of movement and transition run throughout the plans for the Underline, fitting for an infrastructure project underneath a rail corridor. The focus is activity. The Underline, which will vary from 70 to 170 feet wide, will weave throughout the city, creating a mobility corridor for bikes and pedestrians, with various artwork and amenities forming rooms along the path. Can you imagine rollerblading on the High Line?

The Brickell Backyard portion will include a dog park, outdoor gym and basketball court, a 50-foot long communal table, and a gaming table for checkers and chess inspired by similar, ad-hoc tables set up in the city’s Little Havana neighborhood.

Native vegetation, waterfalls, butterfly gardens, and orchids will be spread across the more than 100 acres of open space that will be created or reimagined by the project, another example of the parks-as-rooms concept. Argentine curator Ximena Caminos will be overseeing the project’s public art master plan. Initially called the Green Line, the project will turn a dark, trash-filled, unwelcome space into a park in the city’s backyard.

“In addition to placemaking and recreational components, we’re excited about rebuilding a city,” says Daly.

A different experience than other High Line clones

Like many of today’s high-profile public space projects, the Underline was designed by in-demand landscape architecture firm James Corner Field Operations. But Daly’s quick to point out that, while it’s the work of the same firm behind the High Line, it’s very specific to its surroundings.

Corner himself contrasts the projects as a difference of speed: The High Line, a slow-moving urban promenade, stands in contrast to the fast-moving Underline, a site for fitness, running, cycling, and activity.

“The similarities come from the ways in which we’re working to bring drama to the everyday and encourage people to spend time outdoors,” he told CLAD Magazine.

The focus on movement carries over to the project branding from Hamish Smyth, the graphic designer responsible for the recent series of graphic standards reissues. Based around a U-shaped logo and a bold, black-and-green color scheme, the simple, strong identity, found on signage and furnishings spread across the 10-mile park, will be easy to see in motion and while navigating crossings and curves.

Daly credits many of the park’s features and design to extensive community feedback. Early on in the Underline project’s existence, the Knight Foundation, which has been active in promoting urbanism and economic growth in Miami, became an early backer and funded the master plan. Part of the organization’s support included flying Daly to Copenhagen to meet with planners from Gehl Architects, the firm founded by pioneering urbanist Jan Gehl.

Daly says the Danish research trip taught her the value of taking a tactical approach, and listening to neighbors.

“There’s no playbook to making a good public space,” she says. “It’s about will and community demand.”

Daly, who is a member of the High Line Network, a coalition of planners and advocates working on new urban parks, has also been aware of the downside of high-profile infrastructure projects, specifically accelerated development and displacement along newly valuable, park-adjacent land. According to a 2015 economic impact study of the Underline, the park connects 1,400 businesses and eight transit stations, and roughly 300,000 Miamians live within a 10-minute walk (defined as a third of a mile).

That explains the large economic footprint the project is projected to leave: “20 million square feet of potential new development across the corridor, with a total estimated $3 billion in new gross taxable value,” as well as $50 million in economic output from park operations alone. The trick, as always, will be balancing growth with maintaining affordability and neighborhood character. Daly believes the park project can not only provide transit options and connections to jobs and employment, but adjacent development can help spur the construction of additional affordable housing nearby.

“One of our biggest issues is workforce housing,” says Daly.

When the project is complete—current estimates suggest three miles will be finished by 2020—the Underline may be best remembered as a link in a larger transit expansion. With a southern terminus at the Dadeland Metro stop, near as the proposed Ludlam Trail and existing South Dade Trail, and the north end near the Miami River Greenway, the Underline could become the spine of a much larger transit system. Joining it with the proposed Baywalk project adds another protected pathway to this growing pedestrian-friendly network.

“[The Underline] has catalyzed a lot of new thinking, and a city of the future that’s more multimodal,” says Daly.